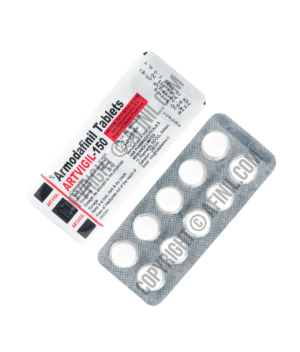 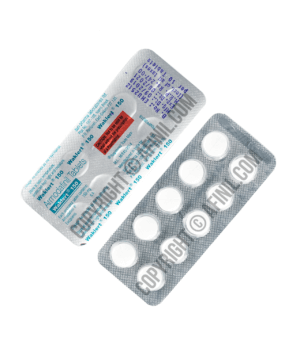 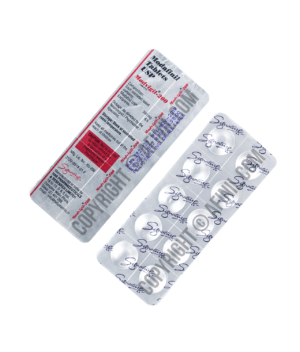 Artvigil 150 mg is a synthetic drug that works to fight daytime sleepiness and promote wakefulness. Manufactured by HAB Pharmaceuticals, it has a similar composition with its counterpart Waklert (armodafinil), but with lesser strength. Artvigil can be bought from our online pharmacy at the cheapest possible price. Discounts are also available through coupons and vouchers.

Artvigil 150 mg is a generic version of Nuvigil, the brand name drug used for treating excessive daytime sleepiness and enhancing cognitive function. It is also used off-label as a cognitive enhancer, where it is purported to improve memory, increase alertness, focus, and creativity. Artvigil is more famous for its off-label use than it is for sleep-related disorders.

Because of its efficacy and high success rate, this drug is growing more in popularity. It is now used by individuals from all walks of life including military personnel, pilots, air traffic wardens, and analysts whose job requires focus and alertness for long hours, as well as students preparing for exams and have a lot of info to take in. This drug has approval from the Food and Drug Administration (FDA) and is considered safe for use.

How Does Artvigil Work?

Like every other nootropic containing armodafinil, Artvigil’s exact mechanism of action unknown. However, from all that has been gathered through research so far, it is believed to work by altering the levels of dopamine, histamine, serotonin, and gamma-aminobutyric acid (GABA) in parts of the brain that control mode and the wake-sleep cycle. They are neurotransmitters that are closely linked to mode, motivation, and wakefulness. They’re responsible for transmitting signals between the neurons in the brain, and their level at any point in time determines wakefulness and cognitive function.

Artvigil, as well as other nootropics containing armodafinil, is more stimulating and has longer-lasting effects compared to its modafinil-based counterparts. Therefore, caution should be taken when using it.

The standard recommended dosage of this drug is a single 150 mg pill taker once a day. The effects will be lasting the entire day. For treating narcolepsy and obstructive sleep apnea, a pill is normally taken in the morning with a glass of water with or without food. On the other hand, for the treatment of shift work sleep disorder, 1 pill is to be taken 1 hour before the start of the work shift.

Artvigil is designed in such a way that a single pill can be divided in half along the line of the depression at the center of the pill to make a 75 mg dose. This is particularly useful for an individual that requires a dosage step down. Individuals who feel highly stimulated by taking a whole 150 mg of the drug may do this. However, rather than attempting to determine the right dosage through trial and error, it is best to seek the advice of a doctor.

Almost every drug has some side effects to watch out for, and so does Artvigil. What matters is how major, minor, or mild they may be. The common side effects that may arise from using this drug are few, and they usually don’t require medical attention. Some of them include dizziness, headache, nausea, diarrhea, rash, dry mouth, anxiety, insomnia.

There are more serious but rare adverse reactions that can result from the use of this drug, and they’re associated with overdosing. They include disorientation, anxiety, paranoia, skin irritations, depression, and hallucination.

In the event that these adverse reactions arise, treatment should be stopped and immediate reports should be made to a doctor.

Drug interaction can either affect Artvigil 150 mg or the drug concomitantly administered with it. On the other hand, the interaction, be it a drug, food, or alcohol-related, may increase the risk of side effects experienced.

Do not take Artvigil with the following drugs:

Do not take alcohol or caffeine while using this drug as they can increase the risk of experiencing adverse reactions. Artvigil does not interact with foods except those rich in fat. Fatty foods slow down the absorption rate of drugs, and this can delay the onset of its effects.

Artvigil 150 mg is a wonderful drug that has left many users stunned at its ability to combat daytime sleepiness and improve focus. Though there are users who’ve reported experiencing severe headaches while using it, they are few. The majority of its users have given it a thumbs up based on its efficacy and duration of action.

Artvigil is actually an effective option to combat drowsiness, daytime sleepiness without experiencing jitters, appetite loss, anxiety, and other side effects experienced with other stimulants.

In spite of the immense benefits it offers, be sure to consult a doctor to find out if it is right for you.

For users looking to get premium Artvigil 150 mg pills at an affordable price, Afinil is the best place to buy. We are an honest online pharmacy that takes customer satisfaction as a priority.

Yes, we offer great discounts through coupon codes and vouchers, but this is not all that our customers stand to benefit from. We also offer free samples so that customers can test the quality and efficacy of or pills before buying.

What’s more, we provide free Express Mail shipping for all orders worth $150 among other options. Besides Artvigil 150 mg, we’ve also got other “smart drugs” up for sale at an affordable price. Buy now, and get the products delivered to your doorstep in 7–12 business days.